A lover of hops, particularly the American variety, Akasha’s owner and head brewer, Dave Padden caught up with us for a chat ahead of the launch of our Akasha Brewing Co. Pack.

Located in Sydney’s inner west, Akasha is renowned for their big hoppy beers, so it was cool finding out what exactly influenced Dave’s brewing style.

In the interview, Dave also shares why he loves working with American hop varieties, and his go-to beer this winter. 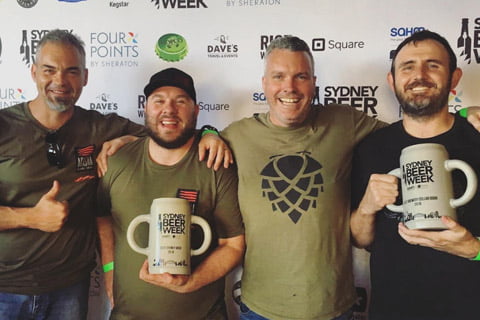 What was the beer that made you want to brew?
I fell in love with quality, independent beer whilst travelling through the United States at the start of the decade. This is where I discovered the West Coast Pale Ale and IPA styles, and there is nothing like a fresh Sierra Nevada Pale Ale off the tap – a beer that has heavy influenced my style of brewing.

What’s the most exciting part of the brewing process for you?
Every part of the brewing process is critical to make sure we are making the best beer possible, but it is the fermentation that presents the opportunity to make a truly great beer. For American Style, hop forward beers the dry hopping stage is a crucial part of that big hoppy aroma and taste and we are constantly looking at new techniques and procedures to make our beers even tastier.

At Akasha you date stamp your beer, what is the optimal time from canning for someone to crack open and drink one of your IPAs?
We strongly believe in giving our customers all the information they need to make an informed purchase decision which is why we put the canned on AND best before dates on all our cans. Most of our beers have a best before date of 9 months. Whilst we believe in drinking hop forward beers as fresh as possible, most of our IPA’s are best at around 3-4 weeks after packaging, but will still be awesome all the way through to the best before date we print on the can.

As we head into winter, what beer(s) we will find in your fridge?
Just because its getting cooler doesn’t mean we should stop drinking IPA’s, and the Blacksmith BIPA is the perfect beer as it starts to cool down. My fridge will be full of them 🙂