It’s the way the best adventures begin, so we were excited to interview Old Wives Ales’ head brewer Mattias Isaksson to find out the beer that made him want to brew and how his Swedish heritage has influenced his brewing style.

Mattias also reveals the secret to successfully merging flavours together and why he thinks his Old Man Yells At Cloud NEIPA has been such a hit! 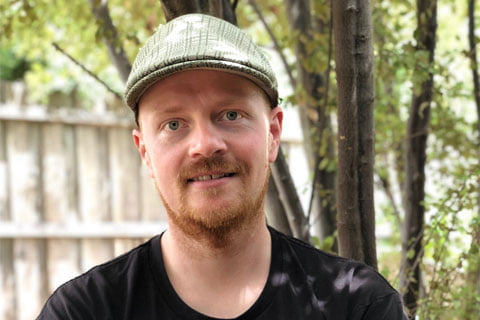 was the beer that made you want to brew?

It was an IPA called “Armageddon” by the New Zealand brewery Epic. It was one of those moments. I hadn’t had many IPAs before this one and my partner had brought me back a bottle from Systembolaget (the Swedish government run booze monopoly). The aromas and flavours were just out of this world. Gave me goosebumps. Even if it didn’t make me run out and buy a home brew kit straight away it certainly paved the way for it.

How has your Swedish heritage influenced your brewing style?

In later years we’ve been quite lucky in Sweden with a really good selection of craft beer at the government monopoly. Being a non profit government body they can’t really sell the beer for too much so we get pretty good deals on awesome beers. Lots of American craft used to hit the shelves in Sweden which made me fall in love with styles like IPAs, American porters, barrel aged stouts and barley wines. The boundary pushing attitudes of the Americans definitely influenced myself and other Swedish brewers I’d say.

Your recipes often push the boundaries when it comes to flavour. What’s your secret to masterfully merging flavours together?

Start with a solid core recipe and work your way out from there. Have a dominant flavour, hop, fruit, yeast or malt derived, depending on style. Then add other flavours that work with the key flavour. Brew one or many trial batches and adjust from there. Also don’t be afraid to try odd flavour combinations and make sure you use high quality ingredients.

Old Man Yells At Cloud NEIPA always flies out of our store. Why do you think this beer was such a success?

It’s got a ton of hop flavour and aroma without being too offensive in terms of bitterness which makes it appealing to beer geeks as well as more casual craft beer drinkers who normally would turn down IPAs due to their often aggressive bitterness. The Simpsons reference and stand out artwork makes it noticeable and memorable as well of course.

Tell us your go-to beer(s) this winter?

To be honest I’ve drank a lot of stout. I just happen to have a real soft spot for Coopers Stout. But plenty of other dark beers have also been had. Our own Imperial Choc Brownie has been consumed plentiful.