Mike Clarke, an ex IT/telco entrepreneur, turned brewer and beer entrepreneur. To him, craft beer is all about variety and brewing allows him to experience and experiment with that variety. It also allows him to have beer on tap, at home, always.

What do you like most about brewing craft beer ?
For me beer is all about variety – and so in brewing our own we get to be innovative and try new things, but ultimately we get to make beers that we would want to drink!

Sauce has been a big player in the inner west brewery scene for over two and a half years now  how do you find new ideas to keep things fresh and interesting ?
3 years now! We just celebrated our third birthday at the end of September. How do we come up with new beers? Usually a few ideas get thrown around by the team, and we think about things like: 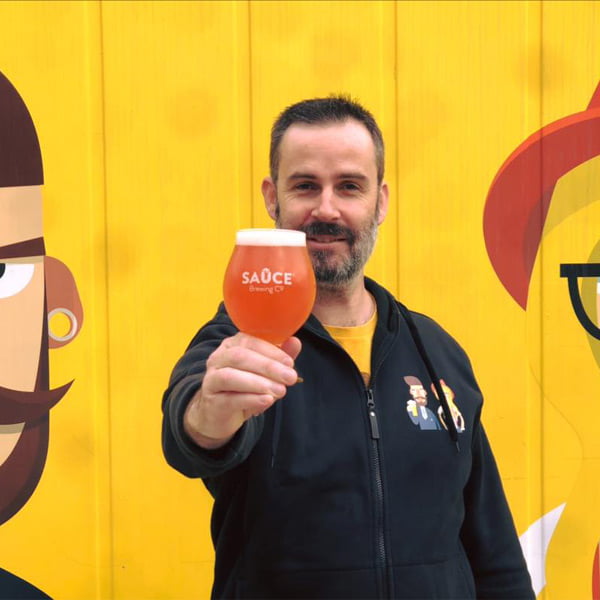 And by process of elimination we decide on the next special batch release. Pilot brews are a lot more fun, they guys get to be experimental and a bit crazy, knowing we only have a couple of kegs to get through and if it doesn’t work, we can always tip it and start again. They’re also a great way to get feedback from customers in the taproom.

You guys recently opened a new brewpub in Cairns. What was the reasoning to take the Sauce brand to North Queensland ?
It was 28 degrees in the middle of winter! But seriously Queensland has really stepped up its craft game in the past couple of years. Cairns is a big town and the locals are super-keen to try all the wonderful new flavours that Aussie brewers are putting out. It’s the kind of place people move to for the lifestyle, or holiday to for the climate. We saw a gap in the market for a brewery like Sauce who focuses on the bigger, bolder flavours, as opposed to “easy drinking” beers that many would associate with a hot climate. Although Cairns relies heavily on tourism (COVID has not been kind), there is a big population here and they love to go out. We’ve tried to build a venue that appeals to and looks after the locals. Tourism, when it comes back, will be a bonus. It was just announced today (2 October) that Sydney-ites should be able to cross the border again from 1 November, so hopefully we’ll see some of you up here soon! (I’m currently typing this from Cairns) Craft beer fans from SA, WA and NT are free to travel here already – and we’ve all deserved a holiday this year!

Mango seems to be a big part of Sauce, what do you feel makes it such a good fruit and flavour to work with ?
I guess you’d have to say it all started with Trubble & Squeak, which was originally a GABS beer that just took off. Trubble now makes an appearance roughly twice a year. We ended up with way too much mango in the coolroom this year after COVID killed off a few plans so we’ve just been using it up! But we use it because we happen to love it, it complements a lot of the hops we use really well. And thankfully – other people seem to love it too.

Are you experimenting with any new styles or hops at the moment ?
Our hard seltzer range (aka Frisson) is the newcomer at the moment. Our take on the style is bit different to many of the other versions out there, it’s brewed naturally just like beer and we use natural fruit for flavour and colour. So it has a bit more flavour than just ethanol and soda water.

We’ve got a beer coming out in December that uses a pretty cool new hop but we can’t tell you about it until after it has made an appearance.

What is your go to beer for this spring season ?
People always ask me “what’s your favourite Sauce beer” and I always say “all of them!”. The truth is I like variety and in a session I won’t have 6 of the same beer, I’ll have 6 different beers. My go-to IPA’s are the Extra-hop Sauce West Coast and the Bubble & Squeak NEIPA, although I’m pretty partial to Hop Sauce and Piss-weak if I don’t want to be falling over too early.

What is one of the more challenging aspects of brewing and coming up with new recipes and delicious beers ?
Every new beer is an experiment. It could be amazing or it could all go to shit…