This is the latest craft beer creation made by our close neighbours, Watch Your Fingers Patisserie, owned by husband and wife team, Nigel and Marion Jeffrey. Earlier this year you may have spotted (or better yet, tasted) their assorted craft beer macarons!

We recently caught up with Nigel and Marion to find out about their patisserie and how best to enjoy their craft beer infused pudding on Christmas Day. 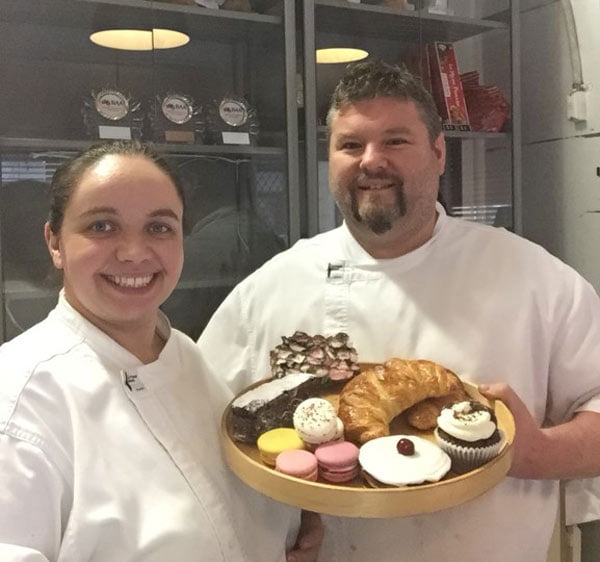 Can you tell us a bit about your experience working with pastry?

Nigel , the Aussie, studied the art of making pastry in England, before working at Sydney’s Quay restaurant as a pastry chef for two years. Then, it was back to England to work with Gordon Ramsay and a couple of 5 stars hotels. Marion, the French one, trained at catering schools in France. She then lived in England for 8 years where she worked at Michelin listed establishments as well as a 5 star hotel, which won ‘Best High Tea in London’. We met, fell in love and moved to Australia in 2012 and after two years of selling our fare at markets, we opened Watch Your Fingers Patisserie in 2015.

What is your signature pastry and/or cake?

Can you reveal some of the ingredients in your famous Christmas pudding?

How long does it take to prepare?

We marinade the fruits and sugar in the alcohol for a couple of days, then add the other ingredients, before steaming each pudding in cloth for 6 to 8 hours.

How does the Black Hops Fiens Imperial Eggnog Stout enhance the flavour of the pudding?

By soaking the fruits in it, the pudding has a moist, delicious taste.

How long does a pudding keep for?

Two to three months, if you can resist that long.

What’s the best way to store it?

Best to store it in a cool, dark place.

How do you like to serve your pudding on Christmas Day?

Reheat it in a steamer or microwave and serve with creme anglaise or brandy (both are sold at the patisserie). It’s also delicious with ice cream.

ADD A CHRISTMAS PUDDING TO YOUR ORDER