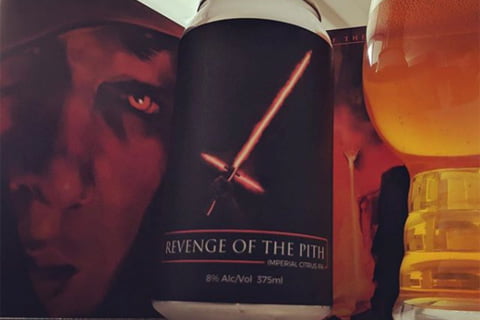 Nick’s Friday Staff Pick!
(It’s kinda tough writing about your own beer, so we asked one of our customers to review our first collab!)

There are some things in life that you’re allowed to be over excited for; your wedding, the birth of your first child, and the release of a new beer collab between one of your favorite breweries and bottlos. Well, that day has finally come!

I was lucky enough to get a sneak peek of Revenge of the Pith, a partnership between the Australian Brewery and Craft Cartel Liquor. When I first read the label I was a tad concerned. An 8% Citrus IPA? Sounds like another hop bomb, big on flavour but lacking finesse. Boy was I wrong!

When Brad Kingsman from Craft Cartel (the creative genius behind the beer) handed over the can, he described it as a old school American IPA bursting with flavour meets a new age Aussie IPA, with its elegance, sophistication and mouth feel. This is spot on the money.

The citrus flavour is really prominent upfront; dancing across your tongue like Storm Troopers cutting loose at a Saturday night disco! Despite the high alcohol content, the finish is surprisingly smooth, with a slight sweetness enticing your taste buds to go back for just one more sip.

All in all a fantastic beer. These small batch brews never last long, so I’ve picked myself up a case. Congratulations Brendan, Brad and the Australian Brewery boys. May the 4th be with you!

SHOP REVENGE OF THE PITH