Some of you have asked us how best to cellar your beer. We put this post together to tell you why, how, and where to cellar that quality brew you picked up — so you can boldly experiment to discover new levels of beer enjoyment. Sound good? Read on.

Why should you cellar a beer?

That’s an important question. Because, isn’t beer best when it’s fresh? In one sense, yes. Most brewers only let a beer leave the brewery when it is exactly right. Enjoying it straight away is never wrong.

However, properly cellaring a beer gives it a chance to change and evolve. Many beers benefit from a little aging and will offer up new and complex flavours. You’ll get a rounder, more refined beer, sometimes a little sweeter. Harsher alcohol edges get shaved off, while pleasant notes — like port, whisky, rich cherry, cider, and more — will emerge. Our bottle shop manager Brendan described the flavour of the Westvleteren XII he cellared for 18 months to be “orgasmic.” Hard to get a better recommendation than that!

The one absolute about cellaring: an aged beer will taste different from a fresh one. Whether that difference is good or bad depends on a few things. 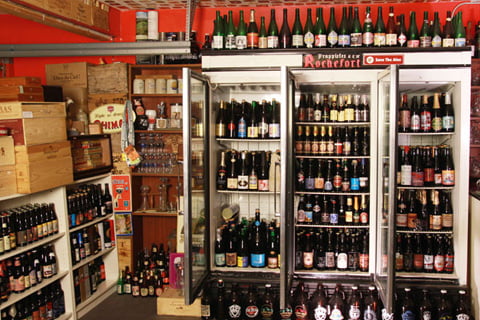 How to cellar beer properly

Beer has three enemies: light, heat, and oxygen. Light and heat destroy flavour, while oxygen alters it. Too much oxygen over time turns a great beer into something that tastes of wet cardboard.When cellaring beer, keep it dark and keep it cool. The ideal amount of light is little to none, and the ideal temperature is between 7ºC and 15ºC. Going colder, as in a fridge, will simply slow the aging process, but going any higher than 24ºC runs the risk of ruining what you were trying to evolve.Unlike wine, which is generally stored on its side to keep the cork from drying, beer should always be stored upright. This reduces the amount of oxygen that touches the beer, lets sediment settle to the bottom (so a careful pour will leave the yeast in the bottle), and keeps the beer away from the cork or cap, which can damage the beer.The length of time you should cellar a beer will depend on the beer itself — a beer can undergo a transformation in as little as 3 months, while most are best in the one to two year range (though certain beers have been cellared for as long as 10 years). We’ll talk about how to find the perfect aging length later in the tips section.

You’ll want a spot that stays dark and stays cool. For beer enthusiasts around the world, that means a basement or cellar, but since those are hard to come by in Australia, we have to get creative.Here are a few ideas we’ve seen that work: If you’ve got access to none of those, your good old fridge will serve. The crisper provides a cold and dark place that has the distinct benefit of already belonging to you.One benefit of cellaring in the fridge is you can try cellaring hop-forward beers. The volatile hop oils don’t always fare well with aging, but the cold temps of the fridge will better preserve your hop flavours.

What kind of beers are best for cellaring?

Just as you want the environment dark, picking dark beers is a good bet for cellaring. Go for malty, hearty beers and beers with an ABV content of at least 8%. Here’s a quick list of beer types that are worth aging, many of which you can pick up from our Rare & Specialty Beer Section: Bottle conditioned and wild fermented or sour ales also make good candidates for cellaring because the yeast is still at work. Not only does that mean the beer is still evolving, the yeast eats up any extra oxygen for a while.

The best tip for cellaring beer

You’ll remember we said cellared beers hit their peak between a few months and many years. Well, how do you know? An obvious move is to ask fellow beer enthusiasts what has worked for them with a particular label. But then, how did they know?The answer is vertical tasting. It’s as simple as getting a few extra bottles of the beer you’d like to cellar. After settling the bottles into their new home, plan to try one after three months, another at the six month mark, and so on.A well aged beer is hearty, rounded, with a lot of depth. When a beer starts to veer towards the thin side or starts giving off unpleasant or cardboard flavours, it’s probably getting past its peak.Keep notes on your cellaring experiments — brands, types, the day it went in, the day it came out, how everything tasted.Finally, always remember the most important element in enjoying your carefully aged beers — having a few mates over to share in the experience.
View All Rare & Speciality Beers