Here are some guidelines to help you pair beer with food — pairings that will make the food taste better, the beer taste better, and make the holidays more joyous for the effort. 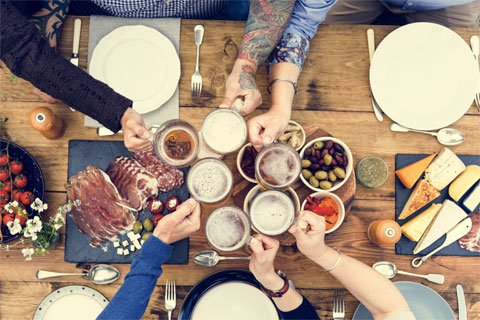 Why pair food with beer?

Pairing beer with food brings another level of enjoyment to both. A level you don’t reach drinking the beer alone or eating the food alone. Together they combine to reveal nuance, depth, and serious eating and drinking happiness.

The easiest way to pair beer with food is to combine like with like. Pair lighter foods with lighter beers and heavy foods with heavier beers. Dishes like salads, seafood and scrambled eggs will go best with lighter bodied beers such as a pilsner or kölsch. Heavier foods like steak with cream sauce need something fuller to stand up to the richness. Go with a stout or barleywine. The same goes for intensity. If you’re serving a delicate stuffed peppers appetizer, you don’t want to overpower it with the intense flavour of a double IPA. Go with a crisp lager instead. Dishes like traditional Christmas roasts will go better with those stronger flavoured beers.

You can also pair up foods based on the tasting notes for your beers. A beer with notes of charred malt, like you might find in a porter, will pair well with charred meats. Earthy notes in a sour benefit from earthy notes in a dish with mushrooms. A fruity lambic will go nicely with a fruit cobbler dessert, while a bitter pale will taste great when served with a dish that includes a strong cheese like gorgonzola.

Everyone knows salt and beer were made for each other. That’s because the saltiness is balanced by the sweet, sour, and bitter nature of beer.

Use this balancing approach to pair spicy dishes with a beer that’s sweet and thick to douse the heat. A sweet fruit dessert can be balanced with a tart beer like a gose. When enjoying fatty and rich foods, the natural carbonation in beer acts as a palate cleanser, washing away the lipids on the tongue and allowing you to better taste all that delicious holiday fare.

The festive season in Australia comes with the added joy of falling in the summer months. That means we get traditional hearty holiday fare, plus the perfect weather for grilling up burgers and frying up fish tacos.

The perfect beers for summertime dishes? Go with an amber with the burgers and try a British-style bitter with those fish tacos. Summer salads go great with a gentle wheat beer. And you’ll probably like the way braised meats pair with strong Scotch ales.

Cheese and beer — the perfect pairing

One last note as you plan your holiday beer and food menu: Don’t forget the cheese. Wine and cheese have had a good long run as ideal partners, but beer and cheese are an even better pairing. One reason? Beer is made with barley, which is a grass, and cows eat grass to make cheese!

The ploughman’s lunch is an example of a long tradition of pairing cheese and beer. An extra large ploughman’s lunch makes an easy but impressive party spread. Cuts of crusty bread, a rich butter, pickles and pickled onions, a bit of chutney, some fruit, maybe slices of ham and boiled eggs. Then add in an English cheddar or stilton. Serve up your ploughman’s spread with a brown or pale ale and you’ve just made yourself a holiday food and beer pairing expert.

FILL YOUR FRIDGE WITH CRAFT BEER