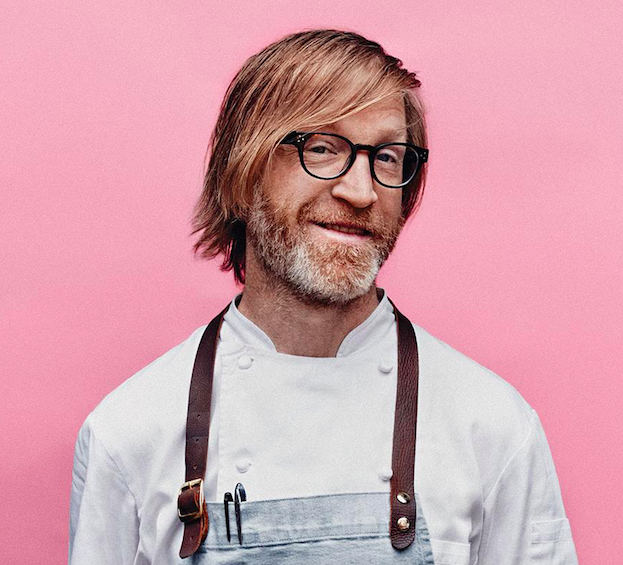 New York-based Michelin-starred chef Daniel Burns is on his way to Sydney to host a very special one-off beer dinner with the folks at Stomping Ground and the Three Blue Ducks in Rosebery as part of the GABS Festival.

Best known for his restaurant Luksus in Brooklyn which opened in 2013, Daniel was the first chef to earn a Michelin star for a restaurant that did not serve wine. Rather, he creatively paired his Nordic tasting menu with beer.

Having previously worked at the Fat Duck, Noma and Momofuku’s culinary lab, we’re sure Daniel’s beer dinner in Sydney on May 17th is going to be sensational.

We recently caught up with him to find out more about his beer-centric restaurant and the art of food and beer pairing.

Your former Brooklyn restaurant Luksus was the first restaurant to earn a Michelin star without a wine menu. How satisfying is it to do something outside the box and be recognised in this way for it?

It was a great honour to get the Michelin star; as it is for any chef and restaurant, I believe. We chose to do something out of the ordinary by introducing beer pairings into the realm of fine dining – and to be recognised for that (in different ways) is very satisfying. Additionally, opening up in Greenpoint, Brooklyn in 2013 with a tasting menu restaurant also went against a lot of norms – so it is nice to be doing something unique and have people enjoy it.

Are more high end restaurants in the US introducing beer sommeliers?

The Cicerone program is certainly growing in popularity; but overall there are still a lot of restaurants where beer is an after thought, which gets reflected in the menus. Knowledge and understanding of styles and craft breweries is growing, as it is globally, but there is a lot more to do in terms of beer offerings in restaurants of any level.

You collaborated with Jeppe Jarnit-Bjergsø, co owner of Tørst and founder of Evil Twin Brewing on a wonderful book called ‘Food & Beer’. What is your number one tip when it comes to pairing beer with beautiful food?

It was amazing to be able to make a book with Phaidon Press and have it serve as one of the first to discuss beer and food pairings in the manner that we did. We wanted to base the discussion on flavour, and so we broke down the chapters in that way. There are many ways to go with pairings, most importantly is to try to have some connection between the food and the beer paired with it – whether that be a harmony that is created between sweet components in a dish and a sour ale, or whether it be a crisp clean refreshing beer to be enjoyed with pickled or spicy foods.

What can guests expect at your beer dinner at the Three Blue Ducks on May 17th?

Cooking for me is a way to showcase the seasons and local ingredients. Travelling all over is inspirational for me, and so I am excited to be cooking in Australia for the first time! We will also serve a few things from the Food & Beer book so that people can try those dishes as well.

Lastly, are there any Australian beers that you are particularly enjoying at the moment?

I have yet to visit Australia – so I am very excited to try the best in craft beer that your country has to offer!!

Food & Beer
A 75-recipe book from an internationally acclaimed chef/brewer duo dedicated to elevating and pairing beer with high-end dining.
Buy it here