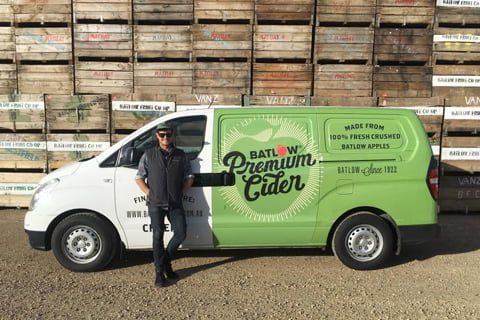 Summer and cider go hand-in-hand, which is why we’ve teamed up with our pals at Batlow Cider to give you the chance to win a sweet pair of boardies and a case of their awesome Cloudy Cider tinnies. If you haven’t entered click here.

To find out more about Australia’s growing love affair with craft cider, we caught up with Rich Coombes, co-founder of Batlow Cider Co.

Why do you think cider is on the up and up Down Under?
Cider popularity has been on the rise as more and more people are discovering how good it is. Cider used to be dominated by a couple of massive brands, but the market has changed completely, similar to the way craft beer has changed the beer category. There’s great depth in the category and variety, making it have this interesting appeal compared to say 10 years ago. Cider is a great alternative to wine and beer, being gluten free compared to beer and lower alcohol/more sessionable than wine.

What is the key to a winning cider?
Great balance is a winning characteristic. All great ciders are well balanced with acidity, sweetness and tanning structure (which is more relevant for heritage/traditional  styles of cider). Great ciders will have a depth of flavour, incredible mouthfeel and be true to what they are. Whether it’s a mouth puckering scrumpy or fresh and fruit driven contemporary Australian style cider, a winning cider will be true to its style.

Tell us a bit more about your partnership with Batlow as a region?
We partnered with the growers in 2010 looking for apples to make cider, which was a pipe dream of my brother & I. We approached Batlow Apples as we grew up with the apples and ended up doing a joint venture with the growers. They own a considerable stake in our business, which means growers can add value along their supply chain. It’s a great partnership and has brought a lot more than just financial benefits to Batlow. Cider has a had a substantial positive impact on the Batlow community as a whole and encouraged more downstream production in the Batlow region.

What is the process behind making cider? Is it more like making beer or wine?
Making cider is essentially making apple wine. Where as wine you have grapes, in cider you have apples or pears. Both cider and wine are made from the juice of the crushed fruit with some help from the yeast, which acts as a metabolic agent, converting the sugars into alcohol and bubbles. A lot of flavour development occurs during fermentation, however the choice of fruit is also very important.  Another key difference of cider v wine (at least in Australia) is that generally cider is best consumed fresh once packaged, where as wine can really benefit more from storage and maturation.

Can, bottle or keg? What’s your preference?
They all have their place. Cans are great for festivals, events and camping trips where glass can be a hassle. Some people see bottles as more premium, but they don’t add much value compared to cans from a quality of product perspective for the types of cider most commonly consumed . If anything cans are better and will keep fresher longer as less sensitive to light and also chill down a lot faster. Kegs are probably the best however, generally the product you find on tap is fresher and it’s better for the environment so you can feel good about having a schooner versus a bottle.

LISTEN TO THE PODCAST