As a true fan of beer, you’re no doubt familiar with the growler. But maybe you’ve wondered about its origins. Wonder if they’re worth the effort. Or where to get one filled in Australia. Maybe you want to know if there’s a superior growler out there (there is).

Here’s a rundown on beer growlers to put all your wondering to rest. We’ll even let you know the growler we like best for bringing home a craft brew. (We liked them so much we even started selling them on our shop.) 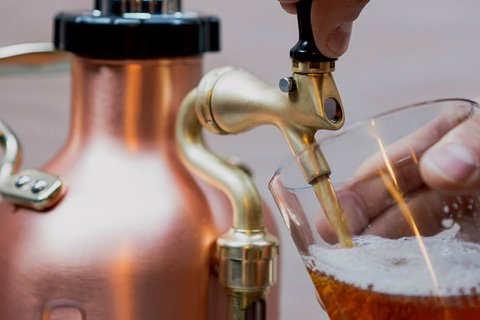 History of the beer growler

People aren’t quite sure why a growler’s called a growler, though the term seems to have come about in the 18th century and referred to a galvanised pail used to haul beer home. As one theory has it, when people carried their favourite beer homeward, the escaping CO2 rattled the lid, making it growl. Another story has hungry workmen with growling stomachs awaiting their lunches — along with a midday beer delivered in a pail. Another yet says that “growling” was the sound patrons and barkeeps made at one another when arguing over the proper fullness of the pail.

Is a growler worth it?

We think so. After the initial investment in the growler itself, you’ll often find you’re paying less per litre for takeaway beer than you would for bottles or cans. And a growler is the only way you’re going to bring certain special or one-off beers home at all, since many brewery experimentations don’t make it all the way to the bottling line.

Then there’s that feeling that comes from knowing a growler awaits in the fridge at the end of the day. It’s a good feeling.

Where can I have my growler filled?

Most breweries, many bottle shops and some bars will fill your growler of choice with whatever’s on tap today. If you’re near Sydney, stop by our bottle shop in Constitution Hill, where we keep a rotating selection of craft beer on four taps. For other parts of the country, take a look at this growler filling station list The Crafty Pint put together.

While just about anything is better than a pail and a lid, there’s a growler on the market today that does away with all the shortcomings of the traditional brown glass jug and gets you close as possible to drinking beer straight from the tap (though we think you should pour it in a glass).

The GrowlerWerks uKeg (and why it’s awesome)

The uKeg from GrowlerWerks is engineered from steel and is double wall vacuum insulated to keep beer cold for eight hours. There’s a sight glass running up the side to tell you just how much beer is left in the keg, and the tap handle locks for spill-free transport.

But the best part is the VPR cap. It’s a patented design that uses regular CO2 cartridges to keep beer carbonated for two weeks (available in kitchen stores and on our site). Everyone knows the first pint out of a glass growler is fantastic, but once you break that seal, the following beers are always a bit flat.

The GrowlerWerks cap allows you to regulate the pressure inside your uKeg and even adjust it for different beers — go lower for stouts, higher for lagers, somewhere in the middle for IPAs. (Check out the pressure chart at the bottom of each product page as a guide.)

The standard uKeg holds 1.9 litres. For those who really want a good supply of brew at home, there’s a 3.7 litre size. With finishes like copper, gloss and matte black, or classic stainless steel, these growlers look every bit as good as they work.

Carry one of these into your local bottle shop and you’re not walking back out without a having a conversation about it. Once you’re home, you’ve got your favourite brew, fresh for two weeks. (Though we doubt you’ll take that long to finish it.)