As it’s International Women’s Day, we reckoned it was a good excuse to catch up with one of our favourite women working in the Australian craft beer industry – Tamie Thorn, the NSW Sales Rep for Capital Brewing Co.

During our chat, Tamie shared how women are increasingly playing a role in defining what Australian beer tastes like and where the future of brewing is heading.

She also dished out some great advice for women keen to work in the craft beer industry. 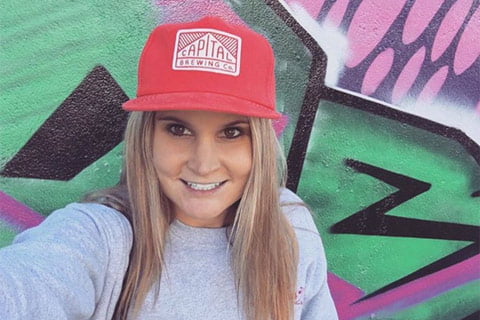 Tell us about the first craft beer you fell in love with?

I will never forget the Alvinne PHI Sour Ale from Belgium. 10% ABV, it was dangerously good! Introduced to me by Aaron at Bitter Phew in Darlinghurst, who always has a great selection of good beers. I was also a big fan of Doctor’s Orders beers but more recently and not to be biased both Capital’s Rock Hopper and Summit XPA are my two favs! I also love Batch Pash The Magic Dragon. With so much choice, you could fall in love with a new beer every week.

What do you like most about the craft beer scene Down Under?

I love how Australia’s craft beer sector is flourishing, with growth expected to continue as drinking habits change. There is an increasing emphasis on quality, flavour and brewing techniques, which means the beers continue to get better and better. However, one thing that excited me the most this year was seeing 11% of the Hottest 100 beers are from the ACT!

You were recently nominated as best Sydney Sales Rep in the Sydney Beer Week Awards. Do you feel it’s important to have more women working in the industry?

Definitely. More women are drinking craft beer, and the industry now boasts everything from female brewers, brewery owners, sales reps, beer bloggers to craft beer enthusiasts. Female brewers are increasingly playing a role in defining what Australian beer tastes like and where the future of brewing is heading. Look at Two Birds and Philter, both champions of good beer!

Have breweries changed the way they market their beer towards women? Do you feel they are more inclusive?

Traditionally beer was seen as a beverage, men would like more but with today’s experimental brewers and the fact that we are pushing boundaries, I think we are seeing more juicy, fruity and easy-style drinking beers, which appeal to both men and women. I see a lot of the mainstream breweries advertising “less sugar/carb beers” but, it’s the craft breweries, who are advertising more variety and choice in flavours, using good quality ingredients and supporting local farmers, which has a greater appeal to me. I think the focus should be on making consumers (both men and women) aware of where their beers come from and what goes into them.

You attend a lot of beer festivals throughout the year, have you noticed more women attending and trying more craft brews?

You don’t have to grow a beard to attend a beer festival! Ha. Every festival is different, but I have certainly seen an increase in women attending and trying more craft brews. I would recommend for everyone to get involved, they are a terrific day out and a great way to educate yourself on all the different beers on offer and engage with people from the brewery. Hope to see you all at the upcoming Newcastle Beer Festival (30th March) and Blue Gum Hotel Beer Festival (31st March).

What’s your advice for other women who are keen to work in the craft beer industry?

They say find a job you love and you will never work a day in your life. My advice to any woman interested in a career in craft beer is to talk to your local brewery about getting started in the industry and reach out to Pink Boots Society, a global organisation aimed at empowering women in the beer industry. Who knows it could turn out to be your dream job – it did for me!
SHOP CAPITAL BEERS