Every now and then a standard strength beer just doesn’t cut it, and thankfully there are plenty of options out there for something that will put some hairs on your chest!

Globally, a few breweries have been slugging it out to see who can create the most alcoholic beer in the world. Currently Brewmeister in Scotland holds the top spot with a fiercely potent beer called Snake Venom (ABV: 67.5%). To save all of you tough men and women the hassle of going and finding out about the rest, we’ve put together a list of the Top 10 Strongest Beers in the world, alongside some suggestions for some local Aussie beers that deliver a good kick.

Forget having a session, downing just one of these beers will make you drunker than a monkey’s uncle. Below we have 10 of the most alcoholic beers in the world, but first 10 of the strongest beers you can buy right now! 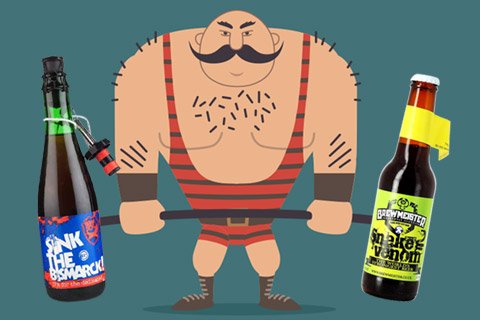 SOME of the strongest beers you can buy right now

10 of the strongest beers from around the world

This brew is reminiscent of a rich vintage port, old cognac, or fine sherry with notes of dark fruit, subtle sweetness, and a deep rich malty smoothness.

When this beer was released in 2009, it was the strongest beer ever produced, and so began the craze to create insanely powerful brews. This beer is freeze distilled three times before being bottled. The result is a fragrant, thick-bodied ice beer with notes of roasted coffee and chocolate.

This pitch black beer has been described as tasting smoky, bitter, malty and roasted with distinct liquorice, chocolate and coffee flavours.

Left to rest in oak barrels, the colour is straw yellow and the taste is smooth with gentle notes of wood and chocolate.

Kettle hopped, dry hopped, then freeze hopped for a deep fruit, resinous and spicy aroma. This is a full out attack on your taste-buds.

Made in a batch of just 11 bottles for $765 each, this beer stirred up quite a lot of controversy because of the vessel it came in – a taxidermy squirrel!

This rare German beer was made in a limited batch of 36 bottles. Impossible to pronounce especially after drinking one!

This Dutch brewery created Start The Future in response to BrewDog’s End of History. Nice one!

Despite having a high alcohol content, this beer also displays a good amount of malts, sweet flavours, and subtle aromas.

Pours a dark amber in colour with no carbonation due to the high ABV. Remarkably it still tastes like a beer despite the high alcohol content.