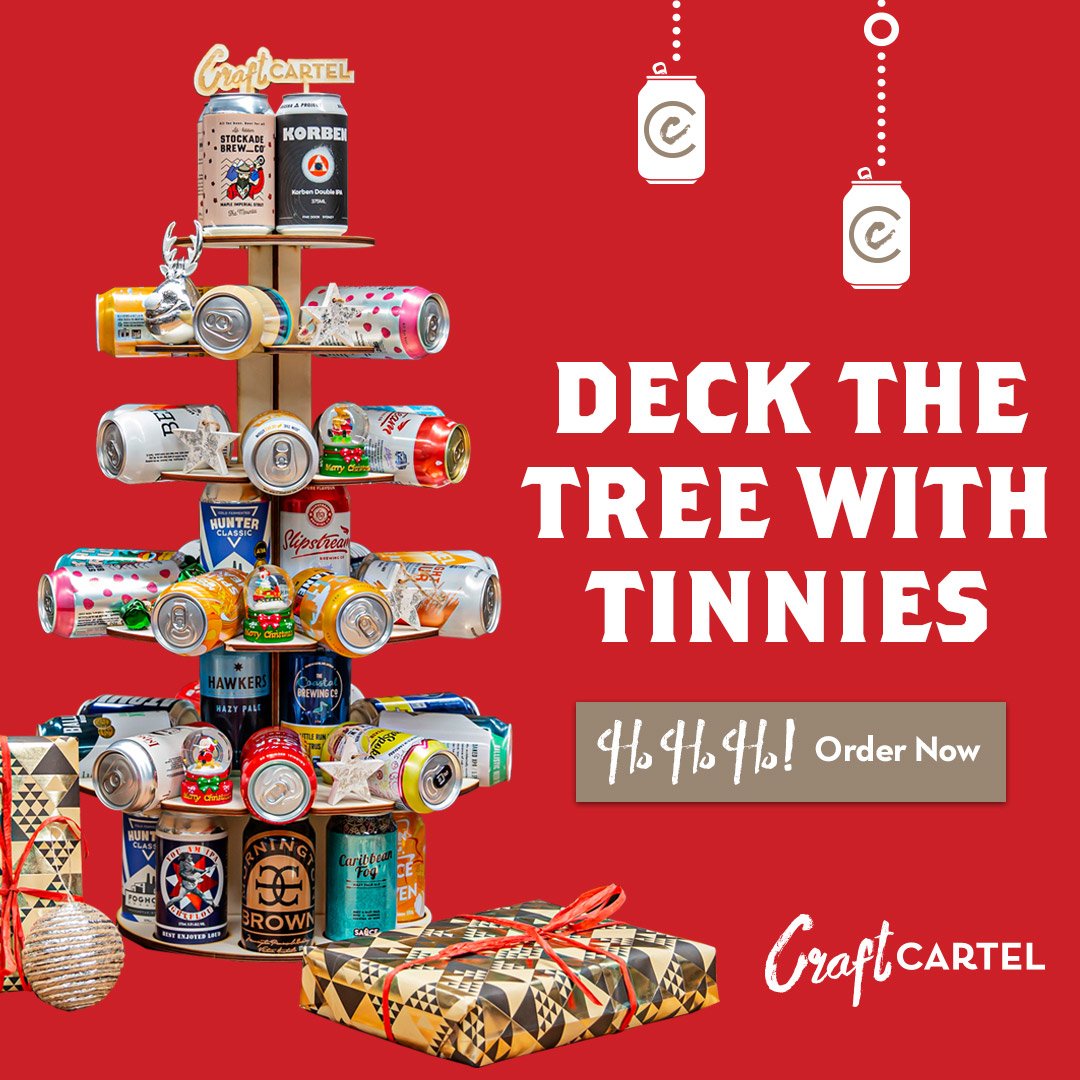 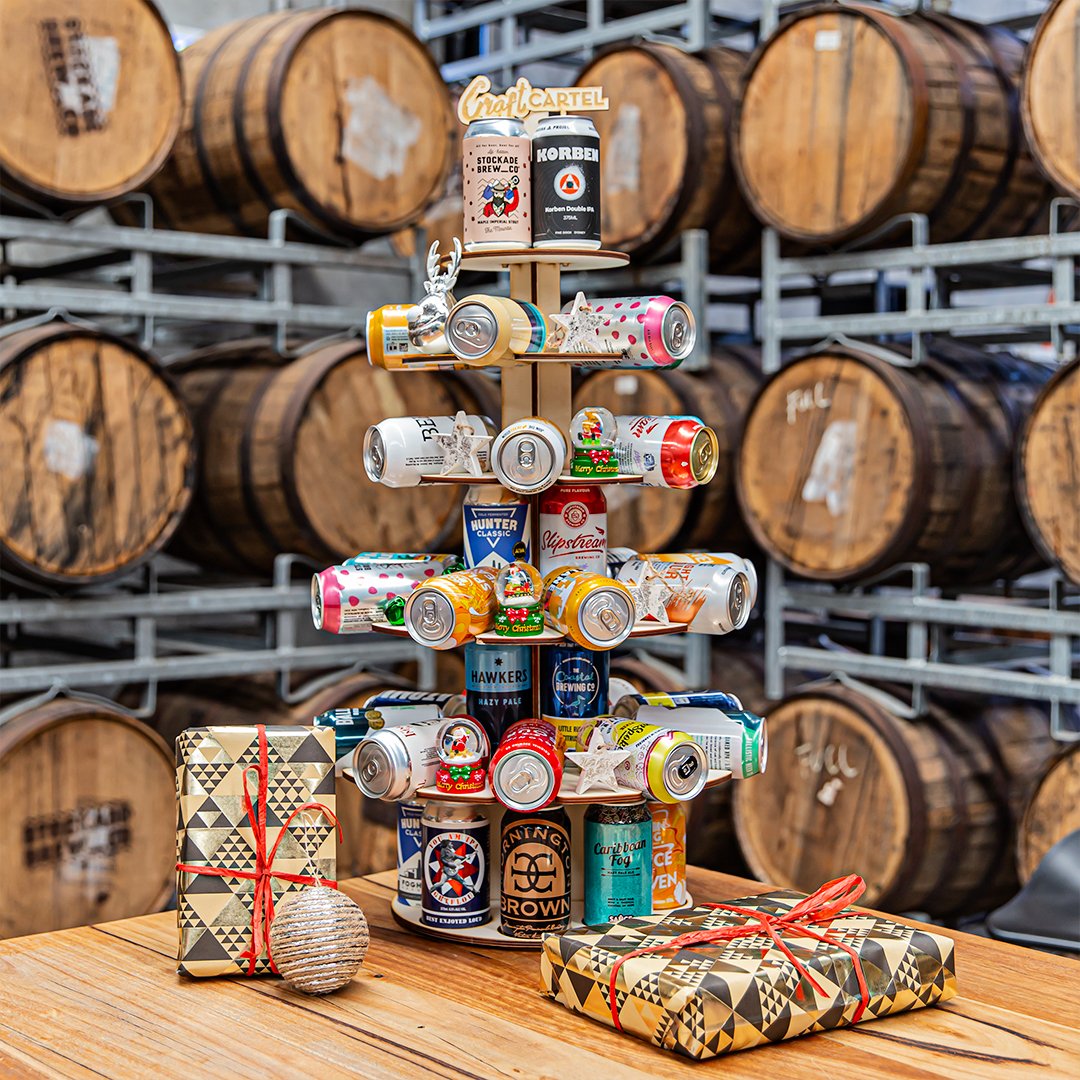 ‘Tis the season to be jolly and enjoy cool refreshing craft beer, so we’ve created a super limited release to share the cheer (& beer!). Introducing our inaugural Craft Cartel Christmas Tinnie Tree! Created in collaboration with Australian designer Domus Vim, this cool, sustainable timber tree comes in a ready to assemble flat pack (to use year on year).

The perfect gift for a craft beer lover or a must-have in your own home. Chill a few cans before your mates pop over and grab a few cold ones straight from the tree. And we’ve included 5 x $20 vouchers to top up the tree with your favourites over the silly season! 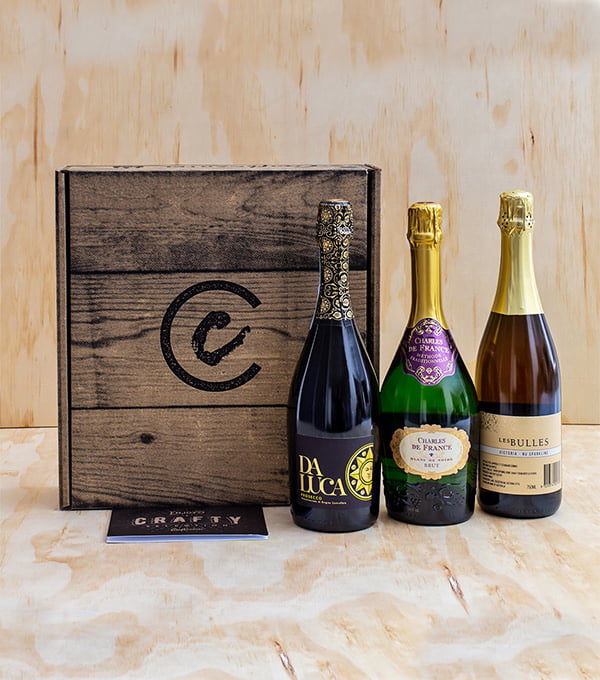 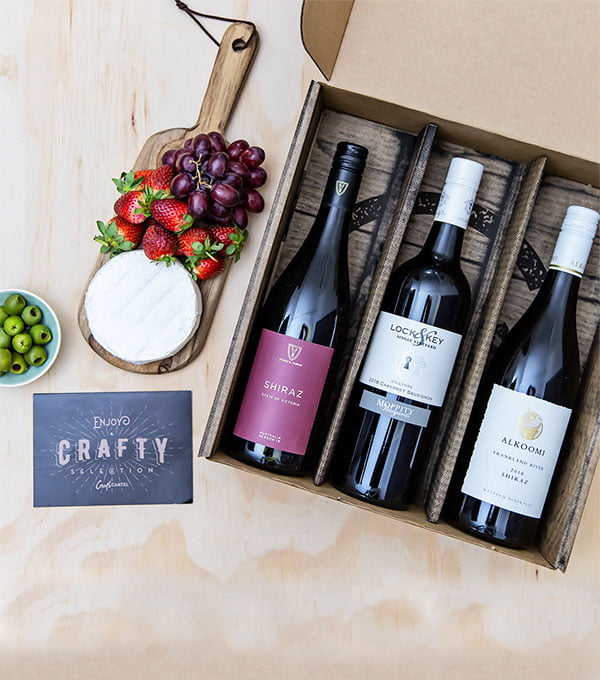 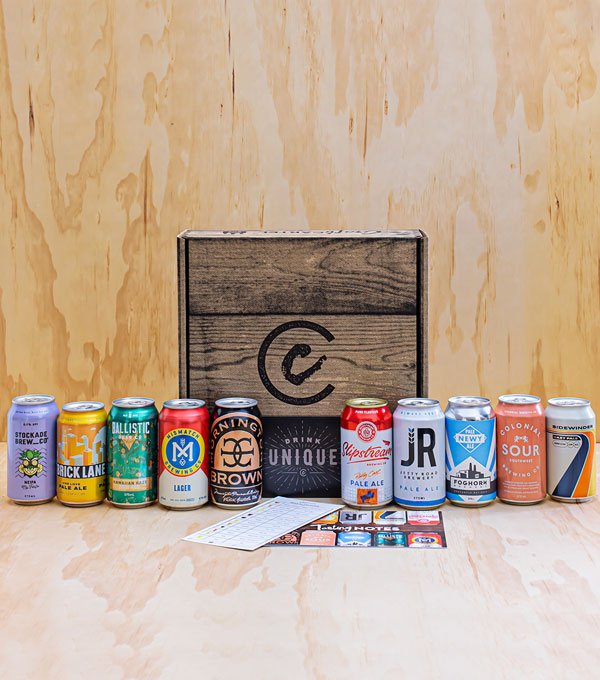 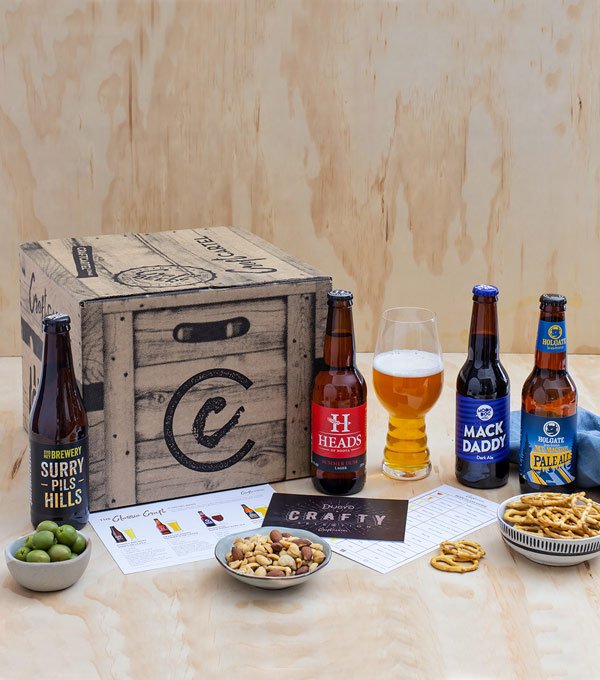 Stockade The Mountie Maple Imperial Stout – ABV 12%
It’s back – but this time even more “Mapel-ier”! This big rich stout is all about roasty raisins, chocolate, maple syrup and to top it off, some more maple syrup.

Akasha Korben Double IPA – ABV 8.5%
From the heart of the hop cosmos comes the Korben. A dazzling constellation of Simcoe, Centennial and Mosaic with a huge passionfruit shine, soaring tropicals, subtle sweetness and a sublime bitter finish, it’s as artfully composed as the music of the spheres.

Bright Mystery Beer Batch 04 – ABV 5.9%
Think you know beer? Think again. Last year, Bright’s brewer brewed a beer – and no one else knew what it was. They asked people to taste it and guess the style – for their chance to win a year’s supply of beer! Now Head Brewer Reid has been at it again and has come up with Mystery Beer Batch-04 – same great concept, another unknown beer! So it’s time to grab a Mystery Beer Batch-04, have a taste, and have a guess!

Revel Margarita Gose – ABV 5%
Like the classic Margarita cocktail with its refreshing zestiness, this Gose evokes and tantalises the flavour senses! Balancing the natural elements of the Gose’s sour and salty character with agave and lime for sweetness. The hefty addition of tequila gives a kick and a slight bitterness.

Sauce Caribbean Fog Hazy Pale Ale – ABV 4.6%
The Fog is back, this time with a lower ABV. Still big on juicy hops (Azacca & El Dorado) but a lot more sessionable at 4.6%.

Moon Dog Splice Of Heaven Mango Ice Cream IPA – ABV 6.2%
Moon Dog’s cult classic Splice of Heaven Ice-Cream IPA is back, this time with a mango twist! They’ve added fresh mango nectar for that fruity icy-pole flavour and smooth, creamy vanilla for a big scoop of ice-creamy goodness. Combining Zappa, Azacca and Loral hops this IPA is perfectly balanced and downright dreamy drinking, it most certainly is a Splice of Heaven!

Tumut River You Am IPA – ABV 6.5%
The malts in this beer are flavourful and mild, with hints of honey and biscuit. But the real star is the combination of hops, both added generously in the whirlpool and through dry hopping, giving flavours of coconut and pineapple. Very easy drinking and refreshing.

Ballistic Oaked XPA – ABV 5.5%
Ballisitc Brewery’s accidentally stumbled across a harmonious balance of oak and hops. It’s now one of their most loved and awarded beers. Oaked XPA can be as simple or complex as you like.

Foghorn Hunter Kolsch – ABV 4.5%
Refreshing lager-like drinkability with the complexity and character of an ale? That’s Hunter Classic. Inspired by the cold fermented Kölsch style ales of Germany, this multi award winning brew belongs 100% to the Hunter. A Trophy winning recipe perfected over 20 years of brewing. Enjoy a classic.

Burleigh Mid-Tide Ale – ABV 3%
Delicately hopped to produce subtle fruit characters. If we hadn’t told you it’s a mid-strength, you wouldn’t have believed it. Just like the optimal mid-tide conditions for perfect waves at Burleigh Point, our go-to ale sits right in the sweet spot. Burleigh Mid-Tide’s flavour belies its alcohol content. And it’s supremely sessionable. Sessionable – what a word. It conjures up images of sharing long summer afternoons with friends over a few frosty ones.

Colonial South West Sour Watermelon & Raspberry – ABV 4.0%
South West Sour Watermelon & Raspberry is a fruity and refreshing twist on Colonial’s much loved South West Sour. Partially fermented with an acidifying bacteria in the brewhouse before undergoing a second fermentation with ale yeast, this is a modern sour style for modern palates. The addition of real watermelon and raspberries strikes the delicate balance between sweet and sessionable. Pouring a beautiful rose gold colour, this ale bursts with the flavours of summer that will satisfy your thirst and be deliciously refreshing.

Hawkers Hazy IPA – ABV 6.2%
Tropical, juicy, and delightfully hazy! Punchy hop vibes take the front seat, defining the dominant character of the beer while a rounded body and low bitterness provide the perfect backdrop for the hops to shine their brightest. The future is hazy!

Gage Roads Atomic Hazy – ABV 4.5%
Inspired by the big juicy hop flavours found in New England IPAs, Gage Roads set out to create a beer radiating with hop character. To make sure Hazy packs that powerful, welcoming aroma they used “Cryo Pop” from Yakima Chief Hops – an experimental product made by maximising the concentrations of the most impactful and complementary hop compounds. But keeping long, warm days in mind – they wanted their new family member to be on the sessionable side.

Bentspoke Fixie Brewed Ginger Beer – ABV 3.5%
Bentspoke’s Brewed Alcoholic Ginger Beer Fixie has drifted back in! A full mash, all-grain brewed ginger with pressed ginger from QLD. It’s got a nice balance of sweetness and a ginger kick! Make sure to grab your fixie!

Coastal Little Run Citrus IPA – ABV 6.4%
Little Run Citrus IPA is brewed with the zest of oranges and lemons from Little Run Retreat in Wherrol Flat on the Mid North Coast of NSW, Mandarina Bavaria, HORT 9909 and Nectaron hops (to add tangerine, citrus, lemon, lime and tropical fruit flavours) and fermented using a Belgian yeast strain (to add a slightly tartness along with delicate mango and pineapple characteristics). This citrus IPA is the ideal beer to enjoy as the weather warms up and the days become longer.

Modus Operandi XPA – ABV 4.2%
With an almost lemony hue, Modus XPA presents its lightness right from the beginning. While Modus is known for its hop-heavy beers, this one has a slightly toned-down approach. Citrus zest aromas lead into floaty tropical notes on the tongue, but the finish cuts off cleanly, leaving nothing but a trace of bitterness.