Well, if you are like most Australians, this is probably a term you’re not too familiar with but in its simplest form, seltzer is basically fizzy water.

Now what has this got to do with beer? For the lowdown on this new drinks trend read on!

Enter HARD seltzers
In the last 12 months, hard seltzers have grown into a billion dollar industry in the US, with brands like Corona and Bud Light cashing in on the market. Somehow, somewhere, some genius has discovered a way to make water even more amazing, by adding alcohol! Lacking the usual carbs and sugar of regular alcoholic drinks, hard seltzers are revolutionising the way we drink.

What’s the history behind seltzer?
The name ‘seltzer’ comes from a spa town in Germany called Selters, which began exporting its effervescent mineral water from the late 1700s. In 1772, Joseph Priestley an Englishman, discovered he could make fizzy water by placing a bowl of water above a beer vat. Then, not long afterwards, J.J. Schweppe commercialised the idea. Yes, it’s his name that you see on iconic fizzy drink bottles in household fridges today.

The earliest entrant to the world of hard seltzer water was in 2013 by a brand called Spiked Seltzer, which was acquired by big beer, AB InBev in 2018. Fast-forward to 2020 and hard seltzer has grown to a 1.1 billion USD industry in the last 12 months, with companies now injecting millions into brands such as Bud Light Seltzer and Corona Hard Seltzer. 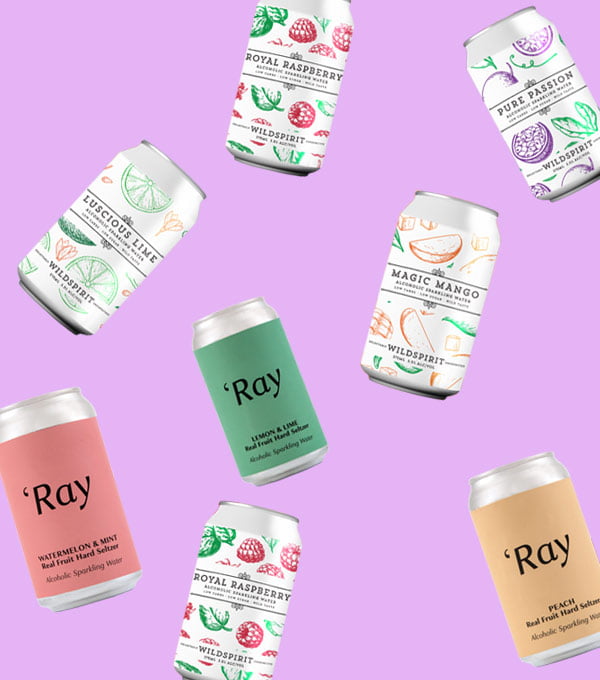 So, what exactly is seltzer?
Seltzer is basically carbonated water, your basic drinking water with added bubbles from carbon dioxide. It differs from other carbonated beverages like club soda and tonic water, in that it doesn’t contain the funny tasting minerals such as sodium bicarbonate and potassium sulphate that club soda contains, or the high fructose corn syrup and quinine that makes tonic water, not really a water at all. After all, it does glow under a black light!

Now take this bubbly magic and step into the world of hard seltzer or otherwise known, alcoholic seltzer. Hard seltzer is produced one of two ways, either brewed, taking advantage of fermentation of ingredients such as rice, for naturally occurring alcohol and fizz or adding alcohol to bubbly water. Add a hint of natural flavour to this already lovely combination and we arrive at what has been dubbed the healthy, mindful way to drink alcohol, with little to no sugar, zero carbs, gluten free and a flavour for every occasion. We wonder who will be the first to bring out a beer flavoured one?

Why are these drinks becoming so popular?
As times change, we are all becoming more aware of the effects of some alcoholic beverages, from the negative health conditions associated with sugar, to the weight gains associated with high carb intake or even the growing reactions to gluten. Now remove all these negative affects and you get hard seltzer, basically all the health benefits of sparkling mineral water with a kick of flavour and alcohol.

Australian craft breweries jump on the trend!
While the growth rate in the US is still increasing exponentially, are we going to see the boom here in Australia? Well we believe it’s already begun, with drinks giant Lion launching Quincy late last year and paving the way for Australian made alcoholic seltzer…. or maybe alcoholic bubbly water as we may prefer to call it?

Australian craft breweries are also jumping on the hard seltzer bandwagon. Take Hop Nation who have produced a trio of hard seltzers known as Ray. The name hails from the brewery’s home in FootscRay. Their alcoholic sparkling water comes in three fresh flavours; peach, watermelon & mint; and lemon & lime.

Wildspirit Distilling Co. on Sydney’s northern beaches is getting in on the action too. They have launched four hard seltzers – lime, mango, raspberry and passionfruit.

If you’re looking for a light, refreshing, low-carb, low-sugar, gluten free alternative, give this new drinks trend a go! When you think about it, hard seltzers are the perfect bevvy for ISO.

KEEN TO GIVE SELTZERS A GO? tRY ONE OF OUR MIXED PACKS! 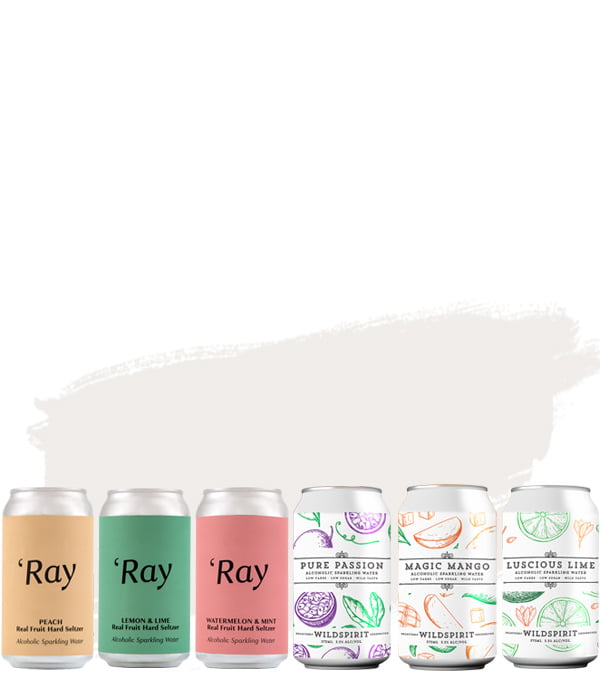 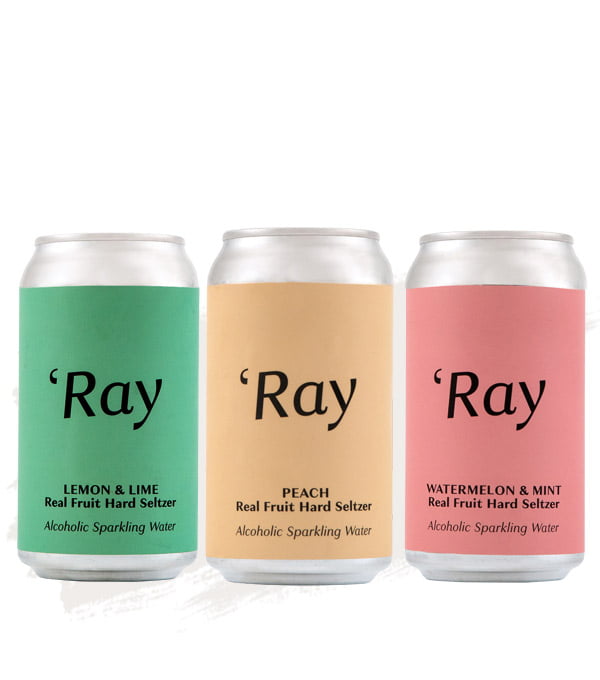 Dubbed the drink of the summer in the US and further afield last year, hard seltzer has slowly been trickling down under. With huge growth amongst some very big players in the craft beer world abroad, it looks set to do the same here. With a little bit more time than usual to experiment over the last couple of months we thought we’d give it a go and we liked what happened, and so here we are with ‘Ray. 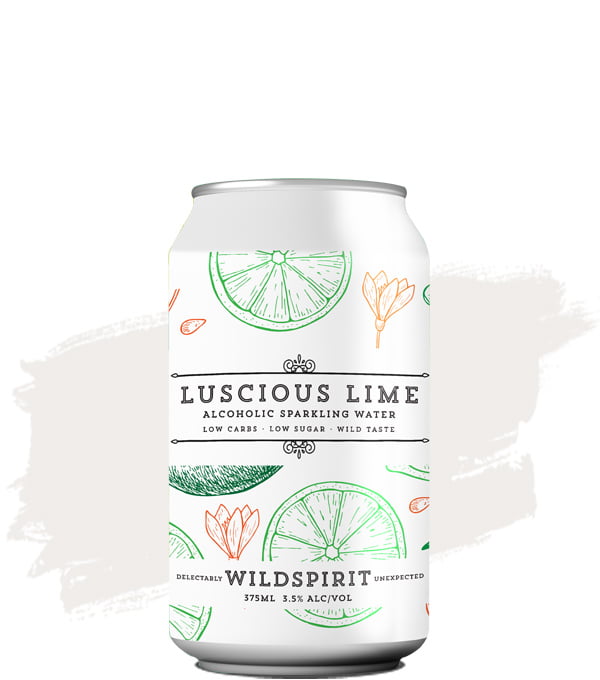 Free your tastebuds with this zingy Wildspirit Luscious Lime Alcoholic Sparkling Water. Made using a hint of natural lime, crisp sparkling water, and our gluten free alcohol base, we’ve created a refreshing alternative to the humdrum vodka & soda.  With less than 90 calories, each can tastes dry – not sweet! Luscious Lime is the perfect
low calorie & low carb refreshment with the wild taste that you’ve been waiting for.  Best served from the can to your lips. 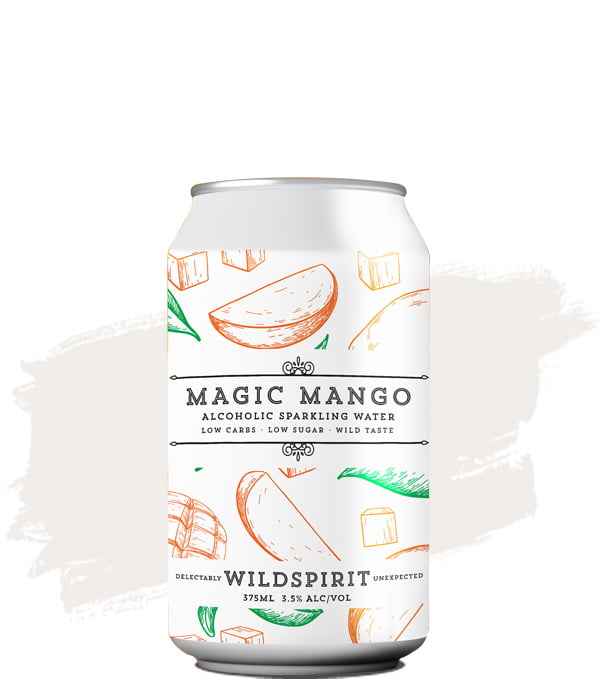 Free your tastebuds with this scintillating Wildspirit Magic Mango Alcoholic Sparkling Water.  Made using a hint of natural mango, crisp sparkling water, and our gluten free alcohol  base, we’ve created a refreshing alternative to the humdrum vodka & soda.  With less than 90 calories, each can tastes dry – not sweet! Magic Mango is the perfect  low calorie & low carb refreshment with the wild taste that you’ve been waiting for.  Best served from the can to your lips. 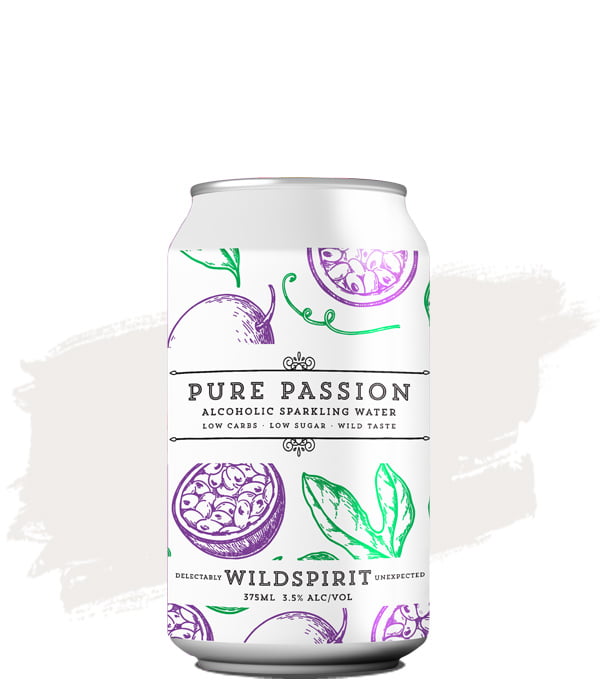 Free your tastebuds with this startling Wildspirit Pure Passion Alcoholic Sparkling Water. Made using a hint of natural passionfruit, crisp sparkling water, and our gluten free alcohol base, we’ve created a refreshing alternative to the humdrum vodka & soda. With less than 90 calories, each can tastes dry – not sweet! Pure Passion is the perfect low calorie & low carb refreshment with the wild taste that you’ve been waiting for. Best served from the can to your lips. 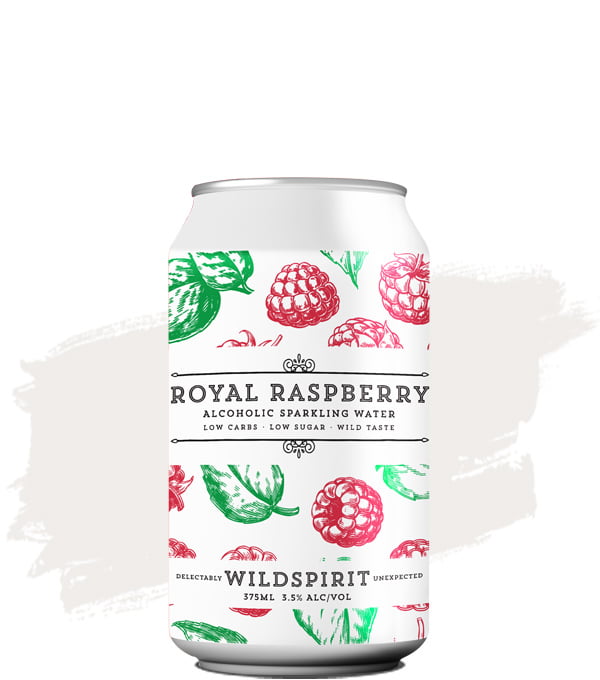 Free your tastebuds with this tantalising Wildspirit Royal Raspberry Alcoholic Sparkling Water. Made using a hint of natural raspberry, crisp sparkling water, and our gluten free alcohol base, we’ve created a refreshing alternative to the humdrum vodka & soda. With less than 90 calories, each can tastes dry – not sweet! Royal Raspberry is the perfect low calorie & low carb refreshment with the wild taste that you’ve been waiting for. Best served from the can to your lips.