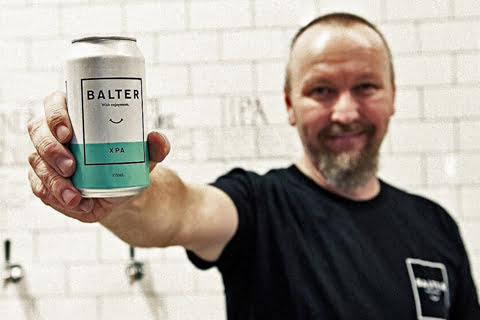 Balter Brewing Company has some big names behind it; local surfers Mick Fanning, Joel Parkinson, Bede Durbridge and Josh Kerr are owners of the Gold Coast brewery. But indisputably, the real star of the show is head brewer, Scotty Hargrave.

Since launching in 2016, Balter has been making waves. It won Best International Pale Ale at the AIBA Awards in 2017, Champion Medium Size Brewery and Best Newcomer (rookie of the year). So, we were pretty chuffed to catch up with the man responsible for this awesome beer.

A former home brewer who went on to enjoy huge commercial success, in this interview Scotty dishes out sound advice to other home brewers considering turning their hobby into a career.

Scotty, you started out as a home brewer. What’s your advice to all the home brewers out there who want to turn their hobby into a career?
I’d say just make sure you really want to turn something that may be a way to switch off the stresses of day to day life into the biggest stress in your day to day life. Is it in your blood? Are you compelled to do this even when common sense tells you not to? Be prepared, be realistic, be ready for the longest work days of your life, have fun and enjoy the ride….!!

You’ve won plenty of awards for your beers, what is your favourite brew you’ve ever produced, and why?
That’s a hard one, every time I create a new beer, it might just be the best one so that’s always exciting. Having said that I do have a soft spot for our XPA because that beer has paved the way for Balter and keeps a whole bunch of us in jobs…

What do you enjoy most about working at Balter? Most importantly putting smiles on dials…people getting enjoyment out of what I do for a living is enormously satisfying….it’s why I do this, it’s why we all do. Being part of a shared dream that we managed to turn into reality and now a bunch of people make a living out of Balter is pretty special too.

The Crafted Festival took place in the Gold Coast earlier this month, do you feel the demand for craft beer is growing in Queensland?
Absolutely, Queensland is turning on to better beer right across the board….And its awesome to see the Gold Coast in particular really getting amongst it. Crafted was a great indicator that we are well underway when it comes to what we call The Good Beer movement….onwards and upwards…!!!

Can you tell us about any upcoming new releases from Balter we should keep an eye out for?
Yeah, we have regular seasonal releases as well as limited releases and collabs planned for next year. Some will be tinnie format and some will be keg only. We also have a beer to make with Stone & Wood, Green Beacon and Pact Brewing for our AIBA Champion Breweries collaboration in mid 2018. Add to that our ever-changing list of Taproom only releases at Balter HQ and there should be plenty for Balter fans to keep an eye out for…