Ahead of the launch of our KAIJU! Beer Pack we caught up with brewer Nat Reeves (pictured right) who co-founded the successful Melbourne brewery with brother Callum and his wife Clara.

A lover of hop-centric beers, Nat shares why he made the bold decision to launch with a show-stopping DIPA.

He also explains how his passion for making electronic music is similar to the brewing process; highly creative and fun, but also takes a lot of fine tuning to make it banging!

You started KAIJU! Beer with your brother Callum. What is it like working with family?
I often have people tell me they’ve met me before. And then I miss most of the conversation as I’m stuck in some inner dialogue trying to remember when I met them. But then they call me Callum and it all makes sense. Though the fact that I have awful hair and am considerably shorter than him makes me wonder how we can be mistaken for each other. 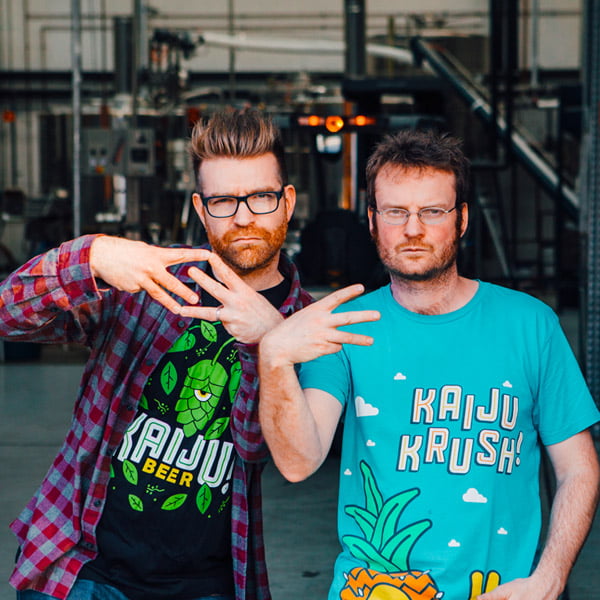 We heard making electronic music is a passion of yours. Would you say that brewing is also a highly creative process?
I think the biggest similarity between beer and music production is that even though the initial concept is highly creative and fun, it’s the fine adjustments that make it banging. Jamming out a rough sketch is like choosing the hops, malt and yeast, but fine tuning the salts is like working the attack and release on a compressor to make the track really breath.

The KAIJU! Pack includes your Aftermath DIPA, which was the first beer you ever released. How come you decided to launch with a Double IPA?
The Double IPA I brewed at home was the best beer I made and the one I made the most of. It also helped there were very few local examples, especially good ones (did I say that?). Every other new brewery at the time was starting with a Pale Ale. It all just kind of made sense to arrive on the scene with a show stopper.

Two years ago we had the opportunity to interview the talented New York based artist, Mikey Burton who designs your amazing beer labels. Why do you think KAIJU!’s monster designs remain so popular?
Mikey’s monsters are just fun creatures I reckon. Even as they lay waste to a thriving metropolis the look on their faces says they’re just trying to have a good time and meet other likeminded Kaijus. I can respect that.

Check out our interview with Mikey here.